A Women's Guide to Handling Guns - A Woman's Self-Defense 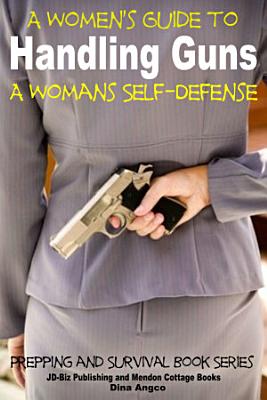 A Women’s Guide to Handling Guns - A Woman’s Self-Defense Table of Contents Introduction Chapter 1 Does a Woman Need a Gun for Self-defense? Chapter 2 What type of gun is for me? Chapter 3 How to get started Chapter 4 The Cardinal Rules of Gun Safety Chapter 5 Parts of a Gun Chapter 6 Learning to Fire your Gun Chapter 7 Practical Shooting – the sport Chapter 8 When you are under attack Chapter 9 Additional Safety Precautions Conclusion Author Bio Bonus Content Introduction Mental Attitude Towards Violence How to Stop from Panicking? Facing Your Attacker Rules to Protect Yourself Going Out to a Party? When You Are Walking What If You Are Being Followed? Traveling on Your Own Traveling in Your Car Relationships Going Wrong No Means No To drink Or Not to Drink; That Is the Question Learning How to Fight Back How to Protect Yourself Against Grabs Conclusion Author Bio Publisher Introduction I wrote this book to share what I have learned in gun handling and to give some idea, not only to women but also to men, of how a woman perceives this man-dominated “gadget” or equipment. I would say that 99% of women who know how to handle a gun or who are engaged in practical shooting as a sport, were influenced by a male in their lives whether it is the father, husband, brother, boyfriend, uncle or a male friend. Gun ownership, inarguably, is a man’s world. But, it did not say that women cannot dip their fingers to it, if it is necessary, or even if she was just plain interested. In my case, the guilty party was my husband who suavely got my nod, first, for him to own a gun and later on, to join him on his shooting practice, tournaments and gun shows. I have to admit that in the beginning, I would cringe whenever I would see him working on his gun (and later on guns). I always have this thought that it will discharge accidentally and someone could get hurt. At that time, I could not even hold a gun. But then, gradually, I warmed up to it ---- I started holding the gun (no bullets, of course) until later on, my husband would be training me on how to hold it properly, how to get the right stance and eventually how to fire it. Believe it or not, within months, I was going with him on his practice shooting and tournaments. At first, I was the photographer and videographer. Eventually, I would be doing my own practice sessions and would join him on tournaments.

A Women's Guide to Handling Guns - A Woman's Self-Defense

Authors: Dina Angco
Categories: Sports & Recreation
A Women’s Guide to Handling Guns - A Woman’s Self-Defense Table of Contents Introduction Chapter 1 Does a Woman Need a Gun for Self-defense? Chapter 2 What

Authors: Carol A. Wiley
Categories: Sports & Recreation
Teaching is an art. Effective martial arts teachers must not only be competent practitioners but must also develop the communication and interpersonal skills of

Authors:
Categories:
The oldest and most respected martial arts title in the industry, this popular monthly magazine addresses the needs of martial artists of all levels by providin

Authors: Stephen Berkley
Categories: Biography & Autobiography
Women of twenty first century are independent and are living on their own very well. But sometimes things can go wrong and a woman has to protect herself by any

Authors: Patrick L. Stearns
Categories: Religion
Many Christian men don't realize that they have access to the same power that raised Jesus from the dead inside of them. Many are struggling to improve as husba

Authors: Martha McCaughey
Categories: Social Science
An examination of women's self-defense culture and its relationship to feminism. I was once a frightened feminist. So begins Martha McCaughey's odyssey into the

Authors: Robert Bruce
Categories: Body, Mind & Spirit
Is everything that goes on in your mind really you? Perhaps not, says Australian psychic researcher Robert Bruce. Drawing on more than two decades of firsthand

A Girls Guide to Self Defense

Authors: Paul Gillel
Categories:
Why write a book on 'Girls guide to Self defence'? Primarily because I'm a man and it makes me angry to constantly read about guys attacking girls, usually for