Freedom All The Way Up 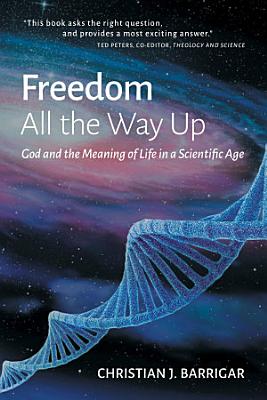 Freedom All The Way Up Book Details:

Freedom All The Way Up proposes four intertwined elements that make up the meaning of life—self-worth, purpose, identity, and hope. Materialism (atheism) claim the universe has no meaning, so there is no larger purposeful story into which we can place ourselves—we are left on our own to construct meaning for our lives. Barrigar argues, though, that the universe possess God’s meaning and purpose—to provide the space and conditions by which to bring about the existence of agape-capable beings in agape-loving relationships with God and with others. In effect, the universe is a great ‘freedom system’ designed by God with freedom built in ‘all the way up’, from the Big Bang to the emergence of big brains and free will. Barrigar describes the emergence of this system through his novel agape/probability account of God’s design for the universe, which integrates such disciplines as quantum physics, statistical mechanics, probability theory, evolutionary psychology, neuroscience, and game theory. This system sets up the conditions for a fundamental choice between autonomous freedom, which focuses principally on self, and agapic freedom, which focuses principally on God and on others. Materialism chooses autonomous freedom, but thereby introduces nihilism into each of the elements of meaning. In turns out that nihilism is a much greater problem for Materialism than suffering is for Theism. In contrast, agapic freedom infuses self-worth, purpose, identity, and hope with God’s agape-love, dispelling Materialism’s inherent nihilism. Freedom All The Way Up provides a dramatic new proposal for God and the meaning of life in our scientific and humanist age.

Freedom All The Way Up

A Path to Divine Intimate Love

Authors: La Ermita - The Hermitage
Categories:
This is a book about the spirituality of relationships. All that we need to help us grow physically and spiritually exists in our daily lived relationships. The

The Testimonies of Slaves

The Department of State Bulletin

Public Papers of the Presidents of the United States