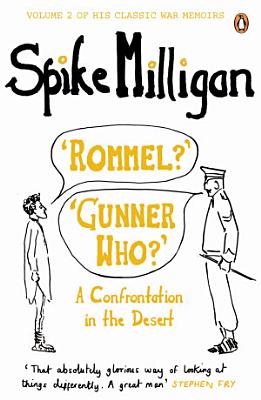 VOLUME TWO OF SPIKE MILLIGAN'S LEGENDARY MEMOIRS IS A HILARIOUS, SUBVERSIVE FIRST-HAND ACCOUNT OF WW2 'Brilliant verbal pyrotechnics, throwaway lines and marvelous anecdotes' Daily Mail 'Desperately funny, vivid, vulgar' Sunday Times ______________ 'Keep talking, Milligan. I think I can get you out on Mental Grounds.' 'That's how I got in, sir.' 'Didn't we all.' The second volume of Spike Milligan's legendary recollections of life as a gunner in World War Two sees our hero into battle in North Africa - eventually. First, there is important preparation to be done: extensive periods of loitering ('We had been standing by vehicles for an hour and nothing had happened, but it happened frequently'), psychological toughening ('If a man dies when you hang him, keep hanging him until he gets used to it') and living dangerously ('no underwear!'). At last the battle for Tunis is upon them . . . ______________ 'The most irreverent, hilarious book about the war that I have ever read' Sunday Express 'Milligan is the Great God to all of us' John Cleese 'The Godfather of Alternative Comedy' Eddie Izzard 'A totally original comedy writer' Michael Palin 'Close in stature to Lewis Carroll and Edward Lear in his command of the profound art of nonsense' Guardian

Authors: Spike Milligan
Categories: Biography & Autobiography
With his lightning-quick wit, unbridled creativity and his ear for the absurd, Milligan revolutionised British comedy, leaving a legacy of influence that stretc

Authors: John England
Categories: Biography & Autobiography
John England uses the words of the song to bring to life his memories of places and people he has known and loved. The memoirs are a personal account of life, f

Authors: Jon Latimer
Categories: History
It also changed the way the British Army fought, using concentrated artillery on a scale not seen since 1918 to break through Axis defences built in depth."--BO